Minor fingernail injuries and infections are common problems that affect most people at some point in their lives. These ailments can range from splitting, brittle nails, to ingrown nails to fungal infections, and may be caused by trauma, poor hygiene, disease or heredity.

Causes and Symptoms of Fingernail Infections

Over-the-counter treatments generally do not help clear up fingernail infections, as they often require prescription-strength antifungal medication, often taken orally. In some cases, a physician may remove the nail. Once the fungus is cleared up the nail will need to regrow in order to replace the damaged material. Because nails grow slowly a new, cleaner nail may take up to a year to grow back.

Ingrown nails can quickly go from a minor irritant to a health risk, especially when the nail is cutting into the skin, as there is a danger of infection. Chronic ingrown nails can be treated by cutting back the nail and applying a substance to inhibit future nail growth.

If you are suffering from ingrown nails or extreme changes in one or more fingernails, contact Dr. Rehman for a comprehensive evaluation and consultation. As with most medical conditions, early detection, awareness and a prevention or treatment plan is the most effective way to combat the effects of fingernail conditions. 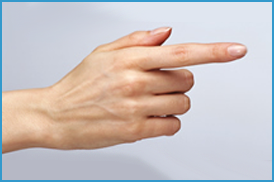